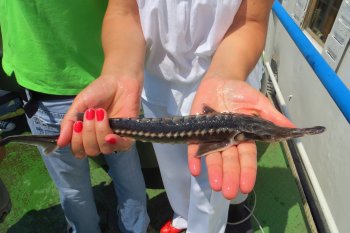 Uncontrolled fishing, fuelled by the high price paid for caviar, has resulted in the decimation of sturgeon in the Danube. In 2012, the Danube Sturgeon Task Force came to the rescue.

In 1970, the survival of the fish was further jeopardised by the construction of the Djerdap hydroelectric power plant on the Serbian/Romanian border. This blocked the sturgeons’ migratory route upstream along the Danube from the Black Sea to their spawning grounds. The species was also endangered by the systematic damming of the river and extraction of the gravel and sand where sturgeon lay their eggs.

Since 2012, the Danube Sturgeon Task Force (DSTF) has focused on rescuing the species. The DSTF’s aim is to foster the synergies of existing organisations and support the conservation of native sturgeon species in the Danube River Basin and Black Sea by promoting the implementation of the ‘Sturgeon 2020’ programme which was launched in 2013.

The Danube Strategy has a crucial role to play in the success of this programme by facilitating communication at a policy level and establishing a constructive dialogue with other key stakeholders in the river basin.

Sturgeon 2020 is designed to attract political support, raise awareness of the importance of protecting sturgeon, and encourage the rapid implementation of EU legislation, international conventions and national laws.

Further measures cover the identification and restoration of key habitats, as well as reopening migration routes, analysis of the existing Danube sturgeon population, an inventory of sturgeon hatcheries and brood stocks, and knowledge exchange on best-practice management in hatcheries. In addition, socio-economic initiatives are intended to incentivise local communities to introduce ‘community control’ to combat poaching.

The DSTF is committed to preserving and restoring sturgeon populations, which is important for biodiversity across the EU. The recovery of the species will bring benefits not only to nature conservation, but also to local communities. The development of ecotourism, aquaculture, handicraft production, and small-scale ecological agriculture are just some of the measures aimed at supporting the local economy, especially in the Middle and the Lower Danube regions.

Sturgeons have inhabited the world from the time of the dinosaur. In the last 200 million years, this fish – 26 species of which still live in the waters of the northern hemisphere – has hardly changed at all. Consequently, these ‘living fossils’ are invaluable to science and for preserving the richness of the species. However, according to the data provided by the International Union for Conservation of Nature and Natural Resources (IUCN), of the five species of sturgeon still found in the River Danube, one is listed as “vulnerable” and the others are in the “critically endangered” category.